Buy the Paperback
or get your
Kindle version
directly from 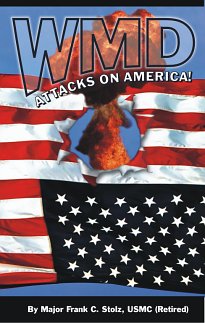 The book is achieving success in academic instruction on terrorism!

WMD Attacks on America! is now part of the reading curriculum at East Kentucky University, Barrigada Community College, Guam; and is being reviewed at Stanford University, Mira Costa College and Saddleback College, California.

After the terrorist attacks on September 11, 2001, Major Stolz and CWO-4 James E. Mulloy, another retired Marine Corps veteran, were inspired to write and publish a tutorial on home remedies and actions to protect families from WMD. Part two of the book includes the complete text of this tutorial guide.

After publication of this guide Major Stolz also decided to write a novel based on a plausible scenario of what we are potentially facing from terrorists using WMD. America better hope this exciting story can be kept as a fictional account. However, just since the books publication, a Houston, TX refinery has in fact been attacked.

The story opens when a newly-elected U.S. President, suddenly confronted with a series of well-executed WMD attacks on America by international terrorists. He must react while trying to govern an unprepared nation. The plot hurtles from one hair raising event to the next as the story unfolds through the actions and interactions of the terrorists, officials and average citizens, revealing how the character, resourcefulness and initiative of individuals in a free society can mean the difference between life or death, liberty or oppression, for millions.

This fictional account is based on realistic scenarios taken from recent and current events, in which the U.S. is attacked by terrorists from Iran, China, and Latin America using Weapons of Mass Destruction (WMD), and in which America's international allies are not always helpful when needed.

Intended as a wake-up call for every level of American society and to alert citizens and government officials about possible scenarios that terrorists could use under certain conditions that already exist. This book comes with a supplemental, non-fiction section to educate readers about actions they should take or avoid in the event of a nearby WMD attack, accompanied by recommended home remedies and resources they can acquire now to begin preparing for such an occurrence.

A scene from the story...

The room was quiet for a few seconds before FBI Special Agent Matthews rose with a flushed and angry face and semi-shouted, "You mean to tell us that you don't have medications for nine-tenths, or two thirds in some cases, of the medications, antitoxins, and fluids needed for this nation for the worst forms of biological and chemical attacks?"

Dianne was now flushed herself, but she was going to teach this law enforcement hick a thing or two about diplomacy, tact, and how the U.S. government worked in proper circles. She began by saying, "Mr. Matthews" (pointedly not Agent Matthews), "do you understand that we purchase items such as medications for storage under the budget provided to us by Congress? Furthermore, do you understand that I also have a very large staff tasked with determining what a given outbreak might be, such as Ebola, Legionnaires Disease, Anthrax, and so forth, and that the funds to accomplish those tasks also come out of the same pile of funds allowed us by Congress? And has it ever occurred to you that we must not only determine what to purchase and how much, but also where to store it, and then pay the costs of transporting and storing it as well? And have you considered that, like your FBI budget, it is never enough to purchase all that might be needed or wanted and that our staffs are also limited due to budget constraints?"

She took a breath and continued. "And has it ever occurred to you that we are inundated and overloaded with unrelenting and under-funded projects, yet each day we receive many more? Did you ever think that perhaps with this body of extremely bright and leading doctors in many different fields, we are doing the best we can with what we have and what is available to us? Whatever you may have thought in the past, we do not have a blank check to purchase the quantities of medications needed to provide protection for every single U.S. citizen, as much as we might like to do so. Now I hope that answers your undignified and unwarranted outburst, and we can now proceed with this meeting."