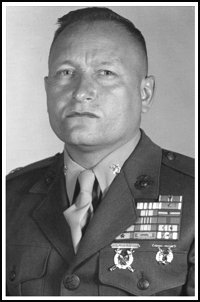 Major Frank C. Stolz is a retired Marine Corps Officer who served 20 years in the Corps, much of that overseas. A Vietnam veteran, he commanded Marine Rifle Platoons and a Rifle Company in combat, later holding duties as an Advisor to Republic of Vietnam (RVN) Forces. His duty assignments also included tours at HQMC, the Pentagon, and the Military Assistance Advisory Group, China. Upon retiring in 1979, Major Stolz worked in Saudi Arabia for 13 years with the Aramco Oil Company, followed by five more years in other Middle and Far Eastern nations, during which he began on-going studies of the Islamic religion and Muslim society and culture. Now retired, he resides in Texas where he spends his time building rental properties in Texas and writing commentary, primarily on military and political issues. He is a graduate of San Diego State University.

I have been genuinely resistant to posting this Citation, principally because my Marines also exhibited all the qualities attributed to me in this award. Without them this Citation would not exist. I have only reluctantly been persuaded by others, of the recognition this will bring to my brave comrades from 3rd Platoon; A Company; 1st Battalion; 1st Marines. Especially those who paid the ultimate price and did not survive. They will always be foremost in my heart and mind and I dedicate this Citation to them!

Read the Citation
This citation and other files on this site require Adobe Acrobat Reader.
Click here to get it free.

Our nation gives out medals
For our wounded and our dead
Made of metal, cloth, and plastic
For the blood that they have shed
So many Hero medals
Rarely given the common men
Who fought the many ugly wars
Just a note on history's pen
Seniors often quick to tell you
Of the medals on their chest
Are worn for deeds of other men
Unknown to all the rest
It seems so strange, so many fell
And the wounded that returned
No awards were ever offered
For the dead, the maimed, the burned
Did so many do so little
That their deeds remain unknown
Is their just reward a Purple Heart
A grave, a white headstone
Didn't anybody see them?
When they joined our nations call
Didn't anybody hear them?
When they gave their soul, their all
Were we all so very busy
To recall the scared who tried
To let us live another day
Many wounded, many died
Combat medals often junior
To the ones that seniors wear
Are seniors blind to those who fought
Or don't they really care?